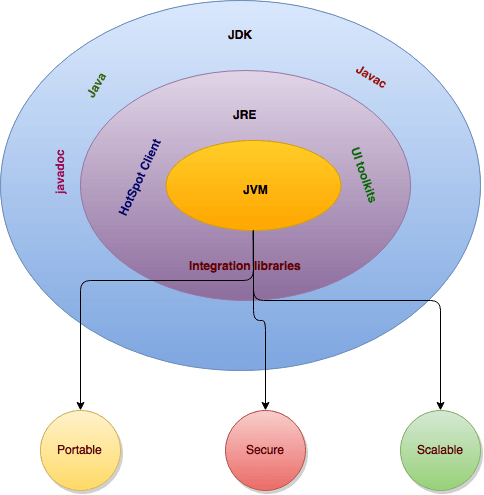 Java Virtual Machine (JVM) is a run-time system that executes Java bytecode. The JVM is like a virtual computer that can perform a set of compiled instructions and manipulate memory locations. When a Java compiler compiles the source code, it generates a highly optimised set of instructions called bytecode in a .class file. The JVM interprets these bytecode instructions and converts them to machine-specific code for execution.

JVMs are implemented for different hardware platforms and Operating Systems, such as Windows, IBM Mainframes, Linux, Mac OS, and so on. Though the implementation details of the JVMs are different, they are all capable of executing the same bytecode.

Key Features of the JVM

Some of the critical features of JVM are:

The Java Development Kit (JDK) is a software development environment that you can use to develop and execute Java applications. It includes the JRE and a set of programming tools, such as a Java compiler, interpreter, appletviewer, and document viewer. The JDK is implemented through the Java SE, Java EE, or Java ME platforms.

Some of the programming tools available in the JDK are:

The Java Runtime Environment (JRE) is a part of the JDK that includes a JVM, core classes, and several libraries that support application development. Though the JRE is available as part of the JDK, you can also download and use it separately.

Some of the components of the JRE are: