Java supports concurrent programming, with its support for Thread programming. A Thread in Java is a small part of the program which, the compiler executes individually. In other words, threads are light-weight processes within a process. It is a sequential path of execution.

The behaviour of the thread is the run() , which is actually declared in an interface called a runnable interface. 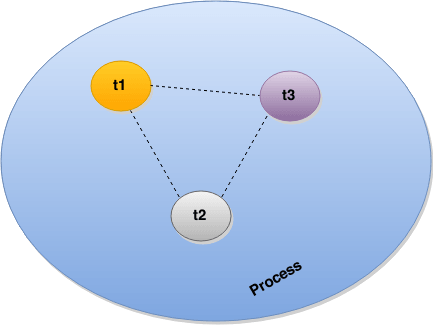 How to Create A Thread In Java?

To create a thread in Java, we can follow any one of the below approaches:

Actually, the above class MyThread is not a thread, because we can not acquire all the Thread class properties here. We acquire only the Thread behaviour called run(). Further, in this case, we don’t call the run method with the start() method, because start() is not available in the Runnable interface. Because it is actually coming from the Thread class. So, we don’t call it a Thread. If we want to make the class as a Thread we need to follow the below syntax.

The Implementation Mechanism is usually better than the Extension Mechanism, as it allows us to separate the Thread behaviour definition from the object itself and thereby giving us enhanced flexibility.

Thread(String name) – Thread Object which will associate with the name.

Thread(Runnable target,String name) – Creates a Thread object with the given name.

Thread(ThreadGroup group,String name) – We can create a thread group by using this constructor.

From the JVM’s point of view, each program will internally be converted as a Thread, from which all the child threads are created. Those may be Daemon Threads or Non-Daemon Threads. By default, all threads are Non-Deamon threads.

A Daemon Thread is a low priority thread (in JVM’s point of view ) that runs in the background to perform tasks such as garbage collection, etc.,

By default, every thread is given a name and a priority.

In the above example, the MainThread class didn’t extend the Thread class and not even implement the runnable interface. But the output tells us the name, priority, group and state of the thread.