What is Exception in Java

The Throwble is the super class of all the Exceptions and Errors.

An Error is a class represents the serious situation, which can not be handled programatically. Hence the programmer can not expected to catch or handle the Errors.

Hierarchy of Exception in Java: 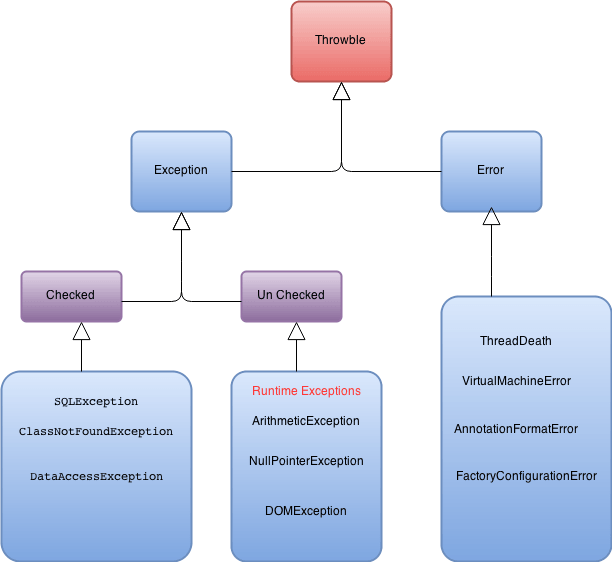 Both checked and un checked Exceptions are raised at Runtime. But unchecked exceptions are not explicitly checked during the compilation of the program.

Who Creates the Exception Object.?

When a program is submitted to JVM for execution, it starts the execution from the main method and continued till it doesn’t encounter an Exception. If it encounter an exception the JVM immediately identifies  the class representing the exception, creates an object of the class and em bides it information capable of helping the programmer to over come the exception. And checks for a mechanism that is capable of overcoming the problem caused and if one is found, it handled over the control along with the object created to that mechanism. In case it doesn’t come across any such mechanism then it handled the exception in its own way by terminating the application.

In Java we have the following keywords to handle the Exceptions.

You May Also Like : How To Handle Exceptions In Java