What is AOP Framework ?

In this tutorial we  are going to understand what is AOP Framework, how AOP Framework deals with the cross-cutting concerns and different types of AOP terminologies.

AOP is not a programming language, Its a methodology.

To understand better AOP framework, lets take an example like Triggers in SQL. In SQL; a trigger is created for a specific action such as insert, update or delete on a table or a view. This trigger then executes at a chosen scenario. AOP is something similar like that. Here is an Aspect created, which executes on a chosen scenario such as before, after, around and so on. 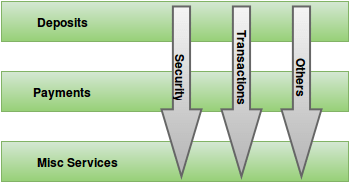 The above diagram represents a typical banking application that is broken into modules (Deposits, Payment, Misc Services). Each module is responsible to provide the services for its particular domain.

We can achieve these cross cutting functionality through OOP also.

In order to overcome the above problems, we can separate primary logic (Business logic) & secondary logic(cross cutting logic) & then we can mix them at runtime with the help of  either is-A or has-A relation of OOP.

If we apply is-A relation then 2 problems are identified.

In this Has-A relation , a business  class has an opportunity  to extend one more business class ,but if a service method is not called the business logic will loose that service.

Here is the major advantage of AOP Framework comes, In AOP methodology, adding the cross cutting logic to the business logics will be taken care by a third person.

With this AOP approach, we are not going to apply Is-A relation / Has-A relation explicitly so, comparatively AOP is a better approach then OOP for adding cross cutting logic to business.

There are 2 types of join point

Introduction is a process of adding new properties of new methods to the business class at runtime while creating a proxy class internally.